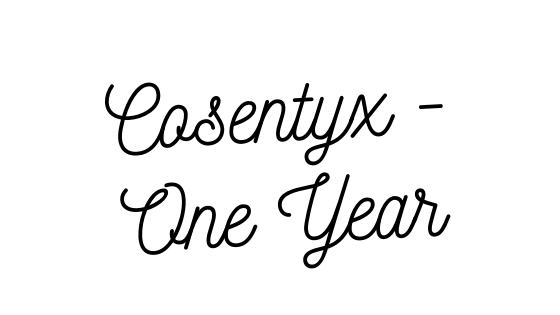 2 days ago was my one year cosentyx anniversary.

I have successfully administered 15 cosentyx injections.

Three days after my first injection my scalp psoriasis had almost completely cleared.

By the end of week one my scalp was entirely clear and my arms were about 50% clearer.

By the end of week three I had only a couple of patches left on my legs.

By the end of week 4 I had only a tiny amount of dry skin, not psoriasis, on my legs.

My knees were better. My toes were a bit bitter. My fingers were improving week after week.

The scarring on my legs eventually faded.

Over the months I have cleared out my bathroom. First the tube of sebco, the one I used to get through every 4 days was binned. Then the medicated shampoos. Then the numerous creams and ointments and moisturisers, and only last week I binned an out of date tub of coconut oil.

Psoriasis wise, having a clear scalp was the most life changing improvement from cosentyx. My scalp psoriasis controlled every aspect of my life. I became aware of it when I was about 14/15 years old in Malta and I realised had a small ‘bite’ on my scalp. I thought it was a mosquito or something and didn’t think too much of it, but over time, it got worse and worse and at some point I must have realised it wasn’t just a bite. I went through my late teens without seeing a GP. I worked a series of jobs that would often require me to wear black tops and it was pretty embarrassing. Constant flaking. But I don’t remember my scalp being super bad. It was probably just a few small areas of psoriasis. I could cope. Life went on.

When I moved to Aberdeen in 2008 my scalp must have become so bad that I made my first ever GP appointment for it. I remember the doctor looking at my scalp and exclaiming he’d never seen anything quite like it and that the plaques were larger than cornflakes. That description of them has never left me. Nor did it ever put me off eating cornflakes. I was prescribed cocois and told to sleep with it on my scalp over night. I stank. Rotten eggs. It was horrible. I sound so attractive. But, to some extent I guess it must have worked. I don’t remember being chained to the shower, I was able to have lots of very drunken nights out and I don’t remember being in constant pain from it.

I don’t remember it being really bad until about 2013. When suddenly it took over my life. My scalp was covered from the base about 2/3 up the back of my head. I went from treating it once, twice a week, to every single day. I went from being able to manage it to having to take days off work because it had become infected. Holidays would be dictated my by scalp routine. A family holiday to Florida not enjoyed to its full extent because I couldn’t jump in the pool and frolic with everyone else because I couldn’t get my hair, and therefore scalp, wet. I could only get in the pool when it fell in to the hair wash routine. Being in Italy and having an early night every other night so I could get back to the hotel and put the 3 hours aside I needed to keep on top of it.

I have, it has to be said, the most patient, understand boyfriend (well, fiancé now!) in the entire world. A man who would cut evenings short with me so I could get back to do my scalp. A man who wants to take me back to Florida so I can jump in the pool without a care in the world.

My joints have improved too. I have no active inflammation. None. Nada. Nothing. This isn’t to say that I am without pain, I’m not. I still suffer from pain in my feet and recently in my fingers and hands. But I am moving. I can walk without pain and move around. I recently spent a great afternoon with my nephew, rolling around on the floor with him, ducking down low to hide behind things and dance around with him. A year ago this would have been impossible for me to do. When I held him for the first time I was covered in psoriasis and I struggled to hold him confidently, my pain was so bad I thought I was going to drop him.

The fatigue still pops up every so often but it’s never connected to cosentyx. The fatigue I have now occurs when I’ve overdone it, as opposed to when I was on methotrexate and the fatigue was so bad I was pretty much in bed for 4 days trying to recover.

Not having scalp psoriasis still blows my mind, almost one year on. To know that I have gone almost 365 days without it. To be able to sit on colleagues chairs at work without leaving a trail of flakes behind me. Not having to sit on a scarf on my own chair. Not having to vacuum after myself every moment of the day. Cleaner house, cleaner car, cleaner desk space.

I struggle to remember now how it felt. How painful it was. How inconvenient it was. It feels like a distant memory, one I hope to never revisit.

Having said that, over the last few months I have started to wonder if the cosentyx is becoming less effective. My fingernails are showing signs of developing psoriasis again. My fingers are hurting. The underside of my toe joints starting to feel a lot like the very pain that started my whole arthritis journey.

I was due to inject on November 5th but because of my upcoming operation I but I have skipped this one, and maybe the next, injections. This fills me with dread. I don’t know if or when I will flare, but I’m expecting it. I know I’ll hurt. I know it’ll be difficult. But at least by not being at work I can ride the pain out at home.

I have what I think is a small patch of psoriasis already returned on my arm and my feet don’t feel like they have as much ‘movement’ as they did before.

My toe straightening surgery comes next. I was denied the surgery so many times over the last two years because methotrexate and sulfasalazine weren’t controlling my inflammation. I am able to have my surgery in two weeks time because cosentyx is doing what those two couldn’t

When it comes to injecting, I am the living embodiment of ‘If I can do it, anyone can’. I was petrified of needles. Even just thinking about one was enough to make me almost faint. But now I can inject without a seconds thought. I know that cosentyx is the only biologic I’ve had but I understand it’s one of the (if not the) least painful injections. I never thought I would find myself looking forward to injecting myself, but I do.

In the one year since I started cosentyx I completed the London Marathon, I turned 30 at Disneyland Paris, I saw the Northern Lights in Iceland, I went to Holland to see my best friend for the first time in 9 years, I’ve just returned from another trip to Paris and will be heading back to Holland shortly. I’ve been to see my favourite bands live, seen shows I love at the theater, spent time with my Sister and been on days out. I got more involved with Arthritis charities and continue to work as an advocate for those of us with psoriatic arthritis.

It’s not been easy.

But it’s been ok.

Just your average 30 something trying to bumble her way through life with inflammatory arthritis. View all posts by sensibleshoesociety

Just your average 30 something trying to bumble her way through life with inflammatory arthritis.