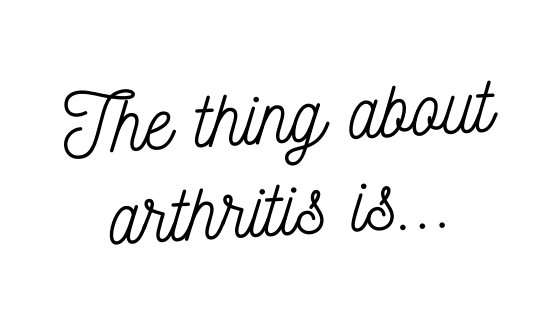 The Easter weekend is here!

Although I’m not that excited as I’m working both today and Monday because I’m all about the money and I’m not allowed chocolate cos my body continues to reject a growing number of foods. JOYOUS!

On Wednesday I was asked:

“What’s the one thing you want other people to know about living with arthritis?”

One thing? THE ONE THING? I have so many things I’m legitimately tempted to jot it all down in a novel.

Where does one even begin with that?

Turns out, I had no idea where to begin with that. So I threw it open to the wonderful internet to try to gauge what the most popular ‘one things’ were. Turns out, we all have thousands of things we want the world to know.

So, being someone with a total disregard for rules (sorry Police Officer Parents, it’s nothing personal) , I decided to narrow it down and submit 5 things.

So ladies and gentlemen, today I present to you:

Now with the benefit of hindsight I wish I’d also mentioned how nothing I did caused this. “If you’d never drunk milk this wouldn’t have happened to you” is a personal fave, closely followed by “If you become vegan now, you can reverse it”.

Despite submitting the piece, I am still unsure what my number one thing is. So many different points link in to each other it’s hard to tell where one point ends and another begins. As I sadly continue to age I feel that the age point becomes less relevant to me (damn you the passing of time!) although at my time of diagnosis it was probably the biggest difficulty I faced when telling people.

So. What is the one thing you want to tell people about living with arthritis? How many thousands of things do you have to say!

Just your average 30 something trying to bumble her way through life with inflammatory arthritis. View all posts by sensibleshoesociety

Just your average 30 something trying to bumble her way through life with inflammatory arthritis.